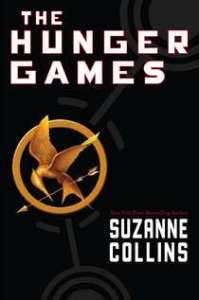 The struggle of right against wrong is probably the oldest theme in entertainment.  When Suzanne Collins wrote her novel, The Hunger Games, it was foremost in her thinking.  However,  society itself molds what is considered right and wrong according to the times, rewriting history and ideals to conform to current thinking.

The Hunger Games, like many excellent novels, moves that conflict to another time and place so that we can clearly see right and wrong for what it is and react accordingly, without prejudice.  This iconic Young Adult dystopian novel, written in First Person Present, certainly brought the entire genre a gigantic step forward, pitching it into the general public as a phenomenon.  Although wildly popular among teens, it has also been a crossover hit with adults, partly because it explores the parameters of right and wrong without prejudice.

In District 12 of the country of Panem, a nation formed from the ruins of the old United States, Katniss Everdeen struggles to feed her family.  Since the death of her father, a coal miner, her mother has become distant and Katniss takes care of her younger sister, Primrose.  Every year, two young people are selected from each district to participate in a fight to the death in a special arena created for them by a game master.  Called the Hunger Games, this event is televised throughout Panem, using special cameras that are hidden all over the arena.  When Prim’s name is unexpectedly chosen, by a representative of the Capitol named Effie Trinket, Katniss volunteers to take her place.  She travels to the Capitol with the male tribute from her district, Peeta Mellark, the son of their local baker.  She remembers that he once threw her a burned loaf of bread when her family was starving.  Accompanied by drunken Haymitch Abernathy, the lone District 12 winner in the history of the games, she learns more about getting sponsors by being likable.

A sytlist named Cinna gives her an appealing appearance and the tributes are all interviewed by television personality Caesar Flickerman.  During his interview, Peeta reveals that he has always had a crush on her, but Katniss suspects he is only saying it to gain sponsors.  Half of the tributes are killed during the first few minutes of the Hunger Games as they try to gain the weapons held in a Cornucopia.  Katniss, Peeta, and a few others run away and the remaining tributes, mostly those from the wealthiest districts who have been professionally trained, join forces to kill them off.  Their leader is a bully named Cato.  While hiding in the woods, she discovers that Peeta has joined forces with them.  She forms an alliance with a young girl, Rue, from District 11, but that is cut short when Rue is killed.  Katniss kills her assassin, then mourns Rue by singing to her and surrounding her body with flowers, an action that elicits much sympathy among the viewers of the event.  Styled as “the star-crossed lovers,” the game master takes advantage of viewer support to change the rules so they can both win if they survive.

Katniss goes looking for Peeta and finds him badly wounded, hiding covered with mud near the river.  She cleans him up and nurses him as best she can, cleaning out a deep wound, and creates a makeshift shelter.  Finally, she kisses him to enhance the story line of “star-crossed lovers” and is rewarded with some broth for Peeta.  Determined to put on a good show and perhaps get some salve for Peeta’s leg, Katniss kisses him again.

Only six tributes remain alive at this point, but they are killed off until only Cato remains.  Forced to the Cornucopia by wild dogs, a struggle ensues until Cato is dead, but the game master changes the rules again, stating that only one of them can be victor.  Katniss brings out deadly berries and they decide to suicide together, but then the game is stopped and they are declared mutual winners.

Haymitch warns Katniss that her act of defiance may have severe repercussions from the government.  At the end, Peeta realizes that she’s been playing a game with his affections to get sponsors and they return to District 12, but Katniss is herself unsure of her feelings.

The book is very economically written, nearly perfect in its concentration on the action, yet through Katniss’ thoughts, we gain all kinds of inside into who she is and we see her arc from someone who just wants to survive into someone who is beginning to understand that a revolution will be necessary.

It moves so quickly that it is tempting to finish the book in one read and then return to it with leisure to savor all of the good writing that makes it a potent novel.

The ideas are not necessarily new, but the style makes it very special.  One of the most difficult things for a writer to create is naming characters and Collins has done a masterful job in giving us names that are unique and resonate.  That carried over so well into the movie where the actors were able to develop their characters based on a name and a very little deep information.

Another triumph of this novel is how well Collins uses the First Person Present perspective.  It is not easy to write, yet in Collins’ hand, it seems effortless.  Moving so quickly, it seems amazingly natural.

An iconic book, The Hunger Games seems destined to be a Young Adult novel that will have many, many years of shelf life, partly because it can be read again and again with deepening enjoyment.

I highly recommend this novel not just for teens, but for all readers.

Please read my review of the movie The Hunger Games!

This third and final installment of the Divergent Trilogy takes the bizarre, complicated plot even further and it relies even more on people making stupid decisions, rending it by far the worst of the three books that make up this ill-advised trilogy.

This review reveals the conclusion of the series, but it is for the benefit of the reader as you may not wish to read the whole thing knowing how it ends.

The battle between the factionless, led by Four’s mother, Evelyn, and the former factions, led by Four’s father, Marcus, heats up considerably, so Tris and Four leave Chicago and find the people who are really running this bizarre mess of a society, the Bureau of Genetic Welfare, and its leader David.  It turns out that these people have really screwed things up by trying to create better humans, so the Divergent are actually normal people and those belonging to factions are genetically damaged.  When Four discovers that he is genetically damaged, he stupidly joins in a plot against the Bureau, which, it turns out, wasn’t such a bad idea because they are in fact the big bad villains.  David decides that since their experiment was a failure, they need to release a chemical throughout the city that will wipe the minds of everyone, then they can start out all over again and do it right.

Reacting against this bizarre notion, Tris throws her life away trying to stop him.

It was established in the other novels that Tris has a death wish, but quite frankly, I never took it seriously, because in all other respects, she seemed (in spite of a steady spate of tears) to be a strong, fairly intelligent person.  She is, after all, the heroine.  Readers need to be aware that this trilogy is a *tragedy* in the true sense of the word.  We’re all so used to having happy endings, especially in Young Adult literature, that reading a dystopian YA tragedy is a pretty shocking affair.

Roth has tried to make her death seem organic, by repeatedly bringing up her death wish, but I really thought that it was perhaps the final thing she had to overcome in order to become a complete person.  No, it turns out that she really hasn’t grown that much at all.  She simply throws herself away.

Although the plot, and especially the ending, are serious problems in the novel, maybe the biggest problem is the “voice.”

In the first two novels, Roth established a wonderful voice for Tris and since both of the books are written in the First Person Present tense, it works very well.  The third novel, however, introduces the voice of Four as she alternates perspective in different chapters.  It is a bit of a shock, after having a consistent viewpoint in each of the first two novels, to have someone else speaking, but real problem is that Roth has not bothered to create a unique voice for Four.  He sounds so much like Tris that many times I had to flip back to the beginning of a chapter to find out who was speaking.  In terms of creating unique characters, this is a very serious problem.  Once I understood that Tris would die, the reasoning became apparent: she had to have someone continue speaking after Tris was dead.  In the end, I don’t think that matters at all.  As soon as Tris died, I closed the book and put it away because the voice I had listened to for several hundred thousands words was silenced and I didn’t care what happened afterwards.

Allegiant has the feeling, like Insurgent before it of being a rushed effort.  I don’t think that Roth truly took the time to think through her story before writing it, because there are so many things that don’t make sense, that don’t seem believable, that it seems unnatural, rather than an organically sound plotting.

My final advice to readers would be to enjoy the first book in the series, Divergent, and be happy with that, because it is the only complete, beautifully written, cogent novel in the trilogy.  It is pretty well designed, with strong characters, a terrific plot, and it is written in a style that makes for satisfying reading.

Of all the Young Adult dystopian trilogies in the market, the Divergent Trilogy starts out among the best and ends up among the worst.