If ever there was a candidate for a movie that needed a Second Look, it is the 2005 Cameron Crowe romantic comedy-drama, Elizabethtown.  Crowe wrote and directed the film, which features music by his wife, Nancy Wilson, one-half of the musical duo Heart.

Drew Baylor (Orlando Bloom) is a rising young star in a world-beating athletic shoe company in Oregon (think Nike) working for a man named Phil (Alec Baldwin).  He has designed what the company has hyped as the next great shoe, Späsmotica, but just before it is released, the reviews start tumbling in and it turns out that it is the biggest turkey ever put out by the prestigious firm, doomed to loose the company close to a billion dollars.  He has to say goodbye to his job and his girlfriend Ellen (Jessica Biel).

When he gets home, Drew rigs his exercycle with a knife in an effort to kill himself, but before he can actually do the deed, his sister, Heather (Judy Greer) calls him to inform him that their father, Mitch (Tim Devitt) has died and that he must go to Elizabethtown, Kentucky, his father’s home town, to cremate the body so that he can bring the ashes back to Oregon.  As they talk, their mother, Hollie (Susan Sarandon) is freaking out trying to cook.  On the flight, he meets offbeat, perky flight attendant Claire Colburn (Kirsten Dunst) and they have an immediate affinity for each other.  She gives him directions on how to get from Louisville to Elizabethtown and gives him her phone number.

After arriving, his cousin, Jessie (Paul Schneider), a former member of country-rock band called Ruckus, greets him and re-introduces him to his dad’s friends and family, including Uncle Dave (Loudon Wainwright III) and Aunt Dora (Paula Deen).  They had planned on a burial in Elizabethtown and are completely against cremation.  He checks into his Louisville hotel and finds him in the middle of gigantic wedding party, “Chuck and Cindy: The Wedding.”  He tries to call Heather, Ellen, and Claire with no luck, then Heather calls him and tells him he needs to return at once to deal with Hollie, who is still freaking out.  Ellen calls him to break up and finally he gets on the line with Claire who is just returning home.  They begin a conversation that lasts all night long, discovering more and more how much they like each other and they finally meet half-way to watch the sun rise together.  They spend the day together and shop for his father’s urn.  Along the way, Drew becomes friends with Chuck and Claire practically joins the wedding party.

With so much going on around him, Drew just doesn’t have either the time or the inclination to grieve for his father’s loss, but he does keep revisiting the man in the form of flashbacks to his childhood.  At one point, Drew is ready to call off the cremation, but it is too late.  The deep has been done, so he collects the urn.  Claire shows up at his hotel again and they finally consummate their relationship, but the next morning, she prepares to leave.  Drew catches her in the hotel parking lot and explains about his monumental failure with the shoe company.  To her credit, Claire doesn’t care, but there is still something that keeps her from committing to him.  She explains several times that both of them are stand-ins, one side of an incomplete relationship and that this role is one they have to play.

As romantic comedies go, this is a very smart one, always entertaining, and deeper than it probably should be.  Crowe is an excellent screen writer and he really knows how to tell a story.  His characters get under your skin and you can’t help but root for them to have success.  Both Drew and Claire are extremely well-written and their romance is something that feels very special, maybe as special as Chuck and Cindy?  Could be.

However, even with such a great script and excellent director on hand, the movie could have easily failed—and nearly did.  The first actor cast as Drew, Ashton Kutcher, apparently had no chemistry at all with Dunst and was replaced after filming had started with Bloom.  It was a brilliant decision because the character of Drew must carry the film and Bloom is extraordinary in the role.  I don’t often rave about young actors suddenly fulfilling their promise, but Orlando Bloom is so engaging, both in the comedy and in the drama, that it is pretty much impossible not to like him and pull for him.  Dunst gives one of the best performances of her career and the worldly, carefree Claire, someone that every guy I know would love to meet.

I always love seeing Susan Sarandon in any movie she does and she is great once again as Drew’s mother Hollie, bringing a careless wonder to a woman trying to cope with the loss of beloved husband.  As if that wasn’t enough, the ensemble cast is terrific.  Paul Scheider is great as cousin Jessie, Bruce McGill is hilarious as Bill Banyan, and both Deen and Wainwright are wonderful in their cameos.

One staple of any Cameron Crowe film is great music and Nancy Wilson has obliged us with a big catalogue of mix and fill music, as well as her own film score that compliments the action and the mix music perfectly.

The end of the film is quite something and I find that I can watch Drew’s trip cross-country back to Oregon again and again for the footage of the great central United States.  And I love that Mitch’s final resting place isn’t one place, but rather an entire country.  I can’t help wishing that I had a son like Drew to help distribute me between Lincoln, Nebraska, Santa Fe, New Mexico, and San Francisco, California.

What a way to go! 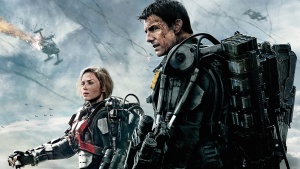 Using the same plot device as Harold Ramis’s temporal breakthrough script Groundhog Day, Edge of Tomorrow gives a more plausible rationale for a person living the same day over and over again, but couches the story in a science fiction action adventure format.

An Education is both a very scary and ultimately very satisfying movie.  Any film that balances tension in such an evocative way deserves attention and this one more than most.  Fortunately, it got it in the form of three Academy Award nominations in 2010, for Best Picture, Best Adapted Screenplay, and Best Actress.

If ever there was a candidate for a movie that needed a Second Look, it is the 2005 Cameron Crowe romantic comedy-drama, Elizabethtown.  Crowe wrote and directed the film, which features music by his wife, Nancy Wilson, one-half of the musical duo Heart.  As romantic comedies go, this is a very smart one, always entertaining, and deeper than it probably should be.

Walt Disney Pictures has given us a most enchanting film in this entertaining blend of animation, CGI, and live action.  Released in 2007, Enchanted was written by Bill Kelly and directed by Kevin Lima with an eye toward both parody and reverence toward the Disney classic animated movies.  It contains wonderful songs by Alan Menken and Stephen Schwartz and sparkles with good humor.

The English Patient is a highly overblown World War II romance. Based on the novel by Michael Ondaatje, the movie was adapted and directed by Anthony Minghella.  It tells a rather choppy story that uses lots of flashbacks to flesh out (literally) the illicit romance between cartographer Count László de Almásy and the wife of his benefactor, Katherine Clifton.