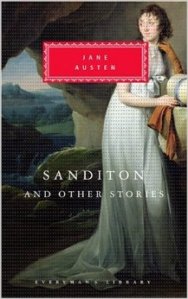 This is collection of Jane Austen’s “unpublished” work is required reading for diehard Jane Austen fans, Janeites, casual fans, English literature students, and anyone who is interested in the process by which one learns to write.

The title story, “Sanditon”, is actually Jane Austen’s final novel, which she was unable to finish. A funny, intriguing story of a little seaside resort, its greatest asset in its unfinished state is the comedy.  I’ve always had the sense that toward the end of her life she was returning to the twisted comedic roots of her juvenilia and this would serve to confirm that.  Unfortunately, it is probably only about one-third of a novel.

Another very sadly unfinished story is “The Watsons.”  I liked this best of everything included in this book.  It tells the story of a girl, Emma Watson, who was raised by her Aunt and Uncle.  When her Uncle dies, her Aunt remarries and moves off to Ireland, sending Emma back to her impoverished family without a cent.  Although Emma has been raised to be very genteel, she really adapts fairly well to returning to poverty, mostly because she has a very sunny disposition.  Her family, however, are a little weird.  Although her oldest sister is fairly well-grounded, the other two sisters (only one of which we meet) are full of foibles.  Pushed into acquaintance with their neighbors, she finds herself sought after by the local lothario and the local nobility, all the while finding herself more interested in the 30 year old parson.

The story is very funny and I laughed out loud a number of times while reading it. When it stopped, only about one-third of the way through, I was severely disappointed.  This is one that got away.  Jane should have finished it.

People hear a lot about Austen’s complete letter novel, Lady Susan, being as the main character is such a bitch. It’s all true.  Lady Susan is an unusual character for Austen to feature front and center, for she is conniving, heartless, and unfaithful.  The only charm she actually possesses is her extreme beauty.  And although in the end, her daughter is rescued from her and Susan received her due, she turns it all with a smile and looks for her next misadventure.

There’s not a lot of great writing in the “Juvenilia,” but the History of England is very funny and shows much of the wit she was to develop later in making Northanger Abbey such a hilarious novel and in endowing so many of her comic characters in the more popular novels.

To avoid disappointment, casual readers might want to read Lady Susan and skip” Sanditon”, “The Watsons”, and most of the “Juvenilia.” An excellent sourcebook and essential for Jane Austen fans.