This classic 1969 John Schlesinger film, adapted by Waldo Salt, from the novel by James Leo Herlihy, won three Academy Awards, for Best Picture, Best Director and Best Adapted Screenplay.  It is the only X-Rated film to ever win Best Picture.  Starring Jon Voight and Dustin Hoffman, in what many consider his signature role, the film is about what happens to our dreams when they are tested against harsh reality.

This review discusses the movie in full detail, so beware spoilers. 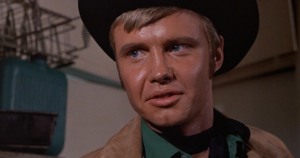 Joe Buck (Voight) is a young Texan who quits his job as a dishwasher and hops a bus to New York City to become a “hustler,” to sell his body to rich old women and make a ton of money.  He wears a buckskin jacket, beautiful shiny boots, and a black cowboy hat.  As the bus travels north, flashbacks tell the story of how his beautiful young mother dumped him with his grandmother, Sally Buck (Ruth White), who raised him while having a series of affairs.  As a young man, he was involved with a girl named “Crazy Annie” (Jennifer Salt) who repeatedly told him “you’re the only one.”  A gang finds them making love in a car and while some of them hold Joe, the others rape Annie while he is forced to watch.

When he arrives in New York, he takes a hotel room and wanders the streets trying to find some woman who needs his services.  A wealthy middle-aged woman (Sylvia Miles) takes him up to her apartment and they make love, but the next morning when he asks for money, she weeps and he actually ends up paying her, by giving her cab fare.

He meets Enrico Salvatore Rizzo (Dustin Hoffman), a street con man that everyone calls “Ratso.”  They have a drink together and Ratso tells him that he knows a pimp who can get him lots of work.  He takes a fee of $20 for setting up a meeting with O’Daniel (John McGiver), then disappears.  O’Daniel tries to get Joe to go down on his knees with him and pray to a plastic Jesus mounted on the back of his bathroom door, but Joe freaks out and runs away.  When his money runs out, he takes to the street.  Seeing young homosexuals on the street dressed in cowboy gear, he agrees to oral sex with a young man (Bob Balaban) in a movie theater, but when the boy tells him he doesn’t have any money, Joe is forced to let him go.  Begging crackers in a diner, he watches a mother playing with her son by running a toy mouse over his face.

One day, walking past a coffee shop, he spots Ratso and tries to get his $20 back, but all Ratso has is some change.  However, he offers to share his room with Joe, a flat in a condemned building that still has running water.  Joe comes back with him and the two of them begin a strange, shaky friendship.  Ratso, whose dream is to one day move to Florida and get healthy, helps Joe to clean up and they try to hijack a male escort service job, but Joe blows it and they are back where they started. 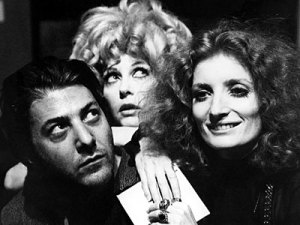 Winter arrives and with it an intense cold wave.  Stuck in their flat with no heat and no money, Joe and Ratso barely get by, but things take a turn for the worse when Ratso gets sick.  Sitting in a diner one day, they are approached by a strange pair, who take Joe’s picture and give him an invitation to a party at their flat.  This odd couple show up at a Warholesque scene involving pulsing music and film, decked out art scene celebrities (including Viva, Ultra-Violet, and other Andy Warhol actors).  Joe smokes a joint and then is given a pill, while Ratso fills up his coat pockets with salami from the ample spread provided.  Wandering into a room filled with red light, Joe becomes entangled with Shirley (Brenda Vaccaro), a wealthy woman who agrees to take him home and pay him $20 for sex.  Ratso, who is now covered in sweat most of the time, falls down a flight of stairs.  Although he has always been crippled, he is now having difficulty walking.

Initially, Joe finds he can’t perform with Shirley, but when she taunts him with being gay, he comes on very aggressively, then is surprised by the aggression she displays, clawing up his back with her fingernails.  Nevertheless, she gives him a referral to one of her friends and Joe thinks he’s finally on the way to becoming a stud.

When he gets back to their flat, however, Ratso is even more sick, so he goes back out and hooks up with a homosexual salesman, Towny (Barnard Hughes).  Worried about Ratso, he tries to get money from Towny, but when the man resists, he beats him and steals the money to buy two bus tickets to Miami for he and Ratso, who can no longer walk.

Ratso wets himself in the bus, so Joe goes to buy them light clothing for the warm weather.  He gets Ratso a Hawaiian shirt with palm trees on it and he throws away his buckskin jacket, boots and cowboy hat.  As the bus nears Miami, Ratso dies in his seat.

There really aren’t enough good things to say about this movie, which today remains one of the best films ever made.  Obviously, it’s for Adults Only, even though the X-Rating was later downgraded to an R.  In spite of the nudity, the thing that really concerned censors at the time was the abundance of homosexuality in the movie, which no longer carries the stigma it once did.  No sex is graphically shown in the film.

I think most credit for the success of this movie is the vision of director John Schlesinger whose use of color, unique camera shots, and creative editing creates a look that is almost one of a kind.  Because dreams are so important, the camera itself has a very dreamy quality, whether it is in the flashbacks to Joe’s childhood or Ratso’s dream of a life in Florida.  The dark blue quality Schlesinger gives to New York City makes it a fully separate world, always fearful and eerie and on the edge of society.  At times, he allows the film to move into black and white and then back into color.  In this film, the city itself functions as dream world and that becomes fully apparent when the sun strikes the two friends on their way to Miami.  They have emerged from the darkness into the light.

The cast is full of terrific actors, which I never realized when I first saw it in a theater so many years ago.  You see it now and can only wonder at stalwarts like John McGiver playing a plastic Jesus loony and Barnard Hughes as a simpering fag.  Bob Balaban was virtually unknown at the time, but Sylvia Miles and Brenda Vaccaro were well-respected actors throughout the industry.  Jon Voight is terrific as Joe Buck and he carries a little boy optimism throughout his terrible experiences, but Dustin Hoffman steals the movie with his fully realized Ratso Rizzo.  Even at the time, it had to be considered one of the best performances of all time, but now it clearly shines and withstands the test of time.  He is simply brilliant.

The song that launches the movie, “Everybody’s Talking,” written by Fred Neil and sung by Harry Nilsson, truly gets under your skin and it sets the tone for the movie in the same way that “Sound of Silence” sets the tone for “The Graduate.”  You won’t be able to get it out of your head and that’s not a bad thing.  The entire score is amazing.  John Barry supervised the music and won a Grammy for Best Instrumental Theme, a haunting melody carried by a harmonica.

Obviously, I recommend this movie strictly for adults, but it must be considered one of the best films ever made, if not in the Top 10, then very, very close.  Brilliant filmmaking!