Insurgent, by Veronica Roth, is the second installment of the Divergent Trilogy, which had a very promising beginning with the first novel, Divergent. 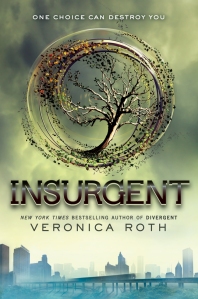 This second novel, however, has a very rushed feel to it, as if it wasn’t properly thought out. I wouldn’t be at all surprised if Ms. Roth was working under some pressure to get the second novel out. This is a common problem in the industry–and also in recordings and movies. A creator will spend years creating something wonderful, but when it becomes a success, the demand for more is so high that new product gets rushed to the market without the benefit of time and thought, so it fails to meet the standards of the first creation. This, in turn, is usually not good for the creator. In the rush of success, they become sloppy artists and suffer in the long run.

The story does not really have an arc, but rather seems to be pulled to and fro with very little logic. Rather than developing one event upon another, I had the sense that Roth herself wasn’t sure what would happen next and just kind of went with whatever came to her.  (Indeed, I’ve learned that she doesn’t outline–and if you’ve got plenty of time for rewrites, that works well, but when you’re rushed, you can end up with something sloppy.)

Unfortunately, the same is true of for Tris, a character that I loved in the first book. She seems way unduly overcome by the death of her parents. Maybe I’m being cold in this analysis, but all of the traits that she developed throughout the first book would seem to leave her stronger and more able to bear this pain. Instead, she constantly loses control of herself. At times, it seemed like she cried every other page for weeks on end and that really, really wore on me. At some point in the book, it crossed over and actually became funny. I’m sure that was not intended in a saga that takes itself so completely seriously.

Part of the problem with the book is that we find the characters doing almost inexplicable things, putting themselves needlessly into dangerous situations. This has become a pet peeve of mine that I think we see all too much today. If a writer can’t really figure out what to do–how to organically develop plot–they simply have their characters do something really stupid. In this novel, it is Tris going to Erudite Headquarters in an attempt to commit suicide by placing herself in harm’s way.

Considering as much time as Roth invested in the first novel in making Tris strong, it just seems totally weird that she would do this. She seems to be overwhelmed by having killed Will–and that seems to drive her as much as feeling responsible for her parents’ deaths. At a certain point, between all the whining, the death wish, doing stupid things, I really lost respect for Tris and when that happened, I lost respect for the whole story.

With all of these preposterous events, I could not suspend my disbelief.

Much as I love the world and the characters that Roth created in Divergent, I must say this was a very disappointing follow-up.

One thought on “Insurgent by Veronica Roth”