Mystic River is a hard-hitting blue collar crime movie by the amazing Clint Eastwood and the cast is packed with great actors. 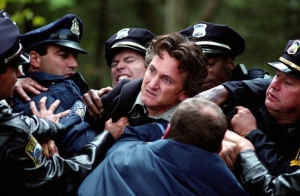 Released in 2003, it tells the story of three boyhood friends forever changed by an incident in 1975. Jimmy Markum, Sean Devine, and Dave Boyle are writing their names into wet cement in the slums of Boston, when a car pulls up with two men in it. One of the men gets out and implies that he is a cop. He intimidates Dave until the boy gets into the car with them. Of course, they aren’t cops, but pedophiles and they abuse him for four days until he escapes.

Twenty-five years later, Jimmy (Sean Penn) is running a convenience store, Dave (Tim Robbins) lives near him, permanently scarred by his experience, and Sean (Kevin Bacon) is a police detective.   Jimmy’s 19 year old daughter, Katie (Emmy Rossum) tells him that she is going out with friends and will be home late. While drinking in a local bar, Dave sees Katie getting drunk and dancing on the bar. He doesn’t get home until 3:00 AM and he is covered in blood, his hand hurt. He tells his wife, Celeste (Marcia Gay Harden), that he was accosted by a mugger and that he beat the man to a pulp, maybe killed him.

The next morning, a Sunday, Jimmy discovers that Katie has not been home all night and Sean is called to a crime scene that is centered on Katie’s car, parked awkwardly on the street, with the door open and blood on the inside. Katie is found dead in a nearby park, her body marked with lacerations and gunshot wounds. Jimmy and his wife, Annabeth (Laura Linney) are inconsolable and he recruits several shady neighborhood characters to investigate the murder at the same time that Sean and his partner (Laurence Fishburne) are also investigating.

While the movie is a murder mystery–and a good one–it goes much deeper than that. Eastwood is concerned with tortured souls, guilt and retribution, and he works the script by Brian Helgeland (based on the novel by Dennis Lehane) for all it is worth. Penn gives a heartfelt performance that won him the Oscar for Best Actor and Robbins is terrific as the tortured Dave Boyle. All of the supporting performances are deep and well nuanced, especially Laura Linney. The Jersey feel is solid, the lighting moody, and music–composed by Eastwood–perfect for the film’s worrisome and tragic plot.

I thought the movie was a little long and might have benefited from some judicious cutting, but it never left me feeling bored. Justice is not served and Eastwood makes a point of the fact that things do not add up–it is part of the appeal of the movie. And it is usually a fact of life that most filmmakers do not worry themselves over. For Clint Eastwood, however, the fact that life doesn’t add up is the very point of the movie. If you’re looking for an outstanding drama, I highly recommend the film.

One thought on “Mystic River”