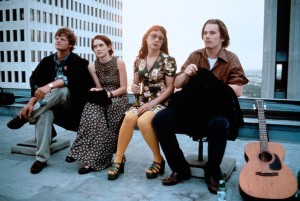 This 1994 movie, written by Helen Childress and directed by Ben Stiller, touches on a number of issues for young people, including attachment to brands, rejection of previous generations, employment difficulties, and romantic angst. Highly successful at the time, much of the movie can be said to be just as valid for today’s young adults as it was when released.

Four college graduates are living together in Houston. Class valedictorian Lelaina Pierce (Wynona Ryder) aspires to become a documentary filmmaker and she uses her friends as willing actors throughout the movie. She has a deep, simmering attachment to musician Troy Dyer (Ethan Hawke) who can’t seem to hold a job, pay the rent, or do his laundry, but plays in a band at night.  Vickie (Janeane Garofalo) works at GAP, where she aspires to become a manager, but in the meantime she works her way through a series of meaningless one night stands.  The fourth person in the trio is Sammy Gray (Steve Zahn), a closet gay.

Laney works at a Houston TV station as a production assistant for an obnoxious morning show host who hates her, but she is videotaping her friends all the time, hoping to make her own documentary on Gen X. While driving with Vickie in the used BMW that her parents gave her, along with a gas card, for graduation, she flips her cigarette out the window and it lands in the car of Michael Grates (Ben Stiller), a young executive for an MTV-like television station called “In Your Face” and he swerves, hitting the BMW.  They begin dating, causing Troy to become jealous.  A former fling of Vickie’s confesses that he has AIDS, so she goes in to get tested.

When she gets upset at how her boss is treating her, she writes obscene prompt cards for him and gets fired. Out on the street looking for a job, she discovers just how difficult it is and goes from TV stations to newspapers to radio stations and can’t get hired for anything.  She goes through a severe depression.  She calls psychics on a 900 number and runs up a phenomenal phone bill, then uses her gas card to survive by hustling for cash at gas stations,   However, Michael proposes her show to his executives and it looks like she’s going to make some real money.  Unfortunately, they completely hack up her film and she storms out of the screening.

Reality Bites aspires to be more than just a teen comedy and in some respects it succeeds. There’s something about idealists sucking down brand name products that’s both funny and sad in that they simply don’t get what they’re doing.  The movie has some really fine moments of both friendship and romance tucked into the basic survival of these four.  When Sammy comes out and confesses to his mother, it is both funny and poignant.  Troy’s posing hides a deeper fear about himself and Laney’s denial of her obvious love for him creates a lot of real teen angst.

The problems in the film are not with Stiller’s direction, but rather his decision to have himself written into the movie. I didn’t believe for one second that this smart, hip, funny girl Laney would go for him and that makes all of the scenes he’s in feel forced, unnatural.  He also forces the humor in his scenes and it brings the whole movie down.  I thought that besides his own role, he did a very good job directing.  All people when they go through this age feel that they know everything about the world and usually end up learning a lot in the process and Childress and Stiller have captured this extremely well.

Outside of Stiller’s performance, all of the acting is very good. Ryder gives us a compelling character, well-developed, and very well acted.  Hawke is appropriately moody and defiant.  Garafolo and Zahn are both terrific, giving us completely believable characters.

The photography feels dark and moody to me, giving the teen angst more feeling. It was well edited, but could have been shorter.  The soundtrack of vibrant young music from the mid 1990’s is very good, very well selected, and appropriately used in the movie.

Altogether, it’s not a bad film, even if it does carry the bravado of thinking it is much more perceptive than it is in reality.