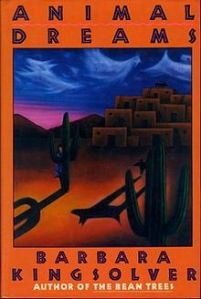 Very occasionally I have the good fortune of reading a novel that both touches me deeply and at the same forces me to do some deep thinking, written in a style that is simple and direct, with such good writing that I can’t stop thinking about it.

Animal Dreams (1990) is a very mature work of art that has the knack of seeming youthful and innovative, yet old and wise at the same time.

The novel tells the story of Codi Noline, a thirty-something woman who moves from Tucson to her hometown of Grace, AZ when Carlo, her live-in boyfriend, moves on and her little sister, Hallie, sets off for Nicaragua to help poor farmers try to raise their crops under constant threat from the Contras. The town of Grace was founded by nine beautiful sisters who moved there from Spain, bringing peacocks with them.  Situated in a desert valley, the abundant orchards provide the only real economic basis of survival since the local mine shut down.  Descendants of the original peacocks roam the orchards, as descendants of the original sisters are the primary inhabitants of the valley.  Except for the Nolines.

The girls’ father, Doc Homer, has told the two girls their whole lives that they emigrated from back east. Their mother died shortly after Hallie’s birth.  Doc has always considered himself to be more intelligent than the locals and he brought both girls up to think themselves better, which led to a number of problems in school.  In fact, Codi trained to be a doctor, but dropped out during her residency and has been working at a 7/11 and drifting through her life since.  She might have stayed in Tucson if Carlo and Hallie hadn’t left her and she hadn’t gotten word that Doc Homer was showing signs of Alzheimer’s Disease.

Taking a job teaching biology at Grace High, she moves into a spare room at the home of her old friend Emilina Domingo and eventually runs into her high school boyfriend, Loyd Peregrina, a Native American with mixed Pueblo, Apache and Navajo blood. Loyd was the father of a child that Codi miscarried as a teenager, but she still feels very strongly about him and they resume their old relationship.

Through Emilina, she finds herself among the members of local women’s club, the Stitch and Bitch Club, and becomes involved in their fight to save Grace from the pollution caused by the former mine.

Codi’s character is deep and very well nuanced. Although she’s disappointed in herself and has a love/hate relationship with her father, she cares deeply about Hallie.  Through he depression, she is also looking for herself and wondering if there can be a Codi with a positive outlook on life.  Her renewed relationship with Loyd helps provide the spark, along with bonding with the local women and feeling like an important part of the community.  Part of the story is her search for self and it is also part of the resolution.

Animal Dreams is Kingsolver’s second novel. I first found her when I picked up her first book, The Bean Trees, in an airport bookstore.  I fell in love with her writing almost on the first page I read, but where The Bean Trees is a simple book in all respects, Animals Dreams carries a maturity that moves it to an entirely higher level in the realm of modern American literature.  It balances the quest for personal knowledge with the question of how much one individual can affect environmental or political change.

I think it’s one of the best books written in the last fifty years and I strongly recommend it to all readers of modern American literature.

One thought on “Animal Dreams by Barbara Kingsolver”