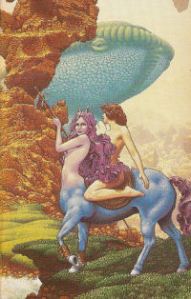 John Varley has had my attention ever since I ran into The Persistence of Vision many years ago.  In that collection of short stories I was awestruck with his creativity and unique approach to science fiction.  Each story was challenging with innovation and new ways of thinking about old problems.

Although Titan isn’t so much cutting-edge as some of his more whimsical short stories, it definitely has it’s moments when you have to slam the book closed, stand up, and walk around in a circle laughing.  It is part science fiction, part comedy, part fantasy and part homage to great and not-so-great science fiction of the past.

The book is set in the not-too-distant future of the next 200-300 years.  It tells the story of the Deep Space Vehicle Ringmaster and her crew on a mission to Saturn.

The captain is a woman named Cirocco “Rocky” Jones (an homage to the old serial “Rocky Jones”) who was born in a corporate wandering family that travelled the globe at the beck and call of corporations who actually run Earth.  Brought up by her mother, Jones always wanted to be an adventurer and ended up becoming an astronaut so that she could – hopefully – see things no one had seen before.

Her navigator is Gaby Plauget, a small woman who has been fascinated with space since childhood and really cares for nothing else.  Other crewmembers include a doctor, engineer and pilot (males) and two cloned sisters.  Sex is a rather open prospect on a deep space vessel, both hetero and homo and Rocky has slept with all of the men.

Upon approaching Saturn, they discover a rather large space object that they at first think is a rogue moon, but when they get closer, the object appears to have been built by intelligence.  They scrap their mission to investigate.  In form, the object is like a huge ring with spokes attaching to a hub, but literally hundreds of kilometers in circumference and doing one full rotation per day as it makes its way around Saturn.

Before they can figure out an approach to the object, they are grabbed and the Ringmaster is pulled toward the object, smashing apart in the process.  Rocky then goes through a process where she is aware of sensory deprivation for a very long time before she is finally coughed up from the ground onto the surface of the ring, with the great hub rotating hundred of kilometers above her.  She finds Gaby and eventually the others and meets up with a species called the Titanides, half-human, half-equine.  The crew name objects using Greek mythology, especially derived from the Titan myths and they decide to call the “planet” or “object” Titan.

Titan is full of many wonderful and whimsical creatures, including a kilometer-long blimp-like flying creature that is intelligent, and creatures fashioned to look exactly like angels, flying through the sky.

Rocky decides that she must travel to the hub to discover if there are any builders alive or if there is a radio so she can contact Earth.  Gaby travels with her on a torturous journey up the strands of cable that hold Titan together, discovering along the way that the object is actually a living creature, whom they rename Gaea (mother of the Titans).

I won’t divulge what happens when they reach the hub – it must be savored by the reader when they actually reach that point and I don’t want to spoil that part.  Let’s just say that it is one of those moments when you must slam the book closed, stand up, and walk around in a circle laughing.

But I will give the warning that the book contains a lot of descriptive sexual relationships, including a detailed description of the Titanides’ sexual construction and the many ways that they may procreate.

I highly recommend this novel to those with open minds and who appreciate creative and whimsical writing.  If you’ve ever wanted to jump into something that will surprise and amaze you with its creativity, this is a book you will want to look into.  And it’s hard to put down once you get started.

3 thoughts on “Titan by John Varley”