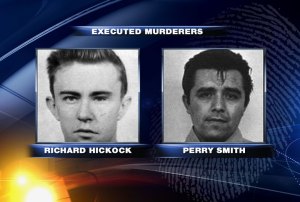 In Cold Blood is a fictionalized account of a real mass murder that took place on November 15, 1959 on a family farm near Holcomb, Kansas. Although this account is as factual as it can possibly be, Capote shapes his characters and the action much in the way a fiction writer would approach a novel.  He creates scenes, writes dialogue, and gets into the minds of the principal figures in the killing and that is part of what gives this book such raw power.

The film Capote, starring Phillip Seymour Hoffman, is based on Truman Capote’s journey in the creation of In Cold Blood, from generating the idea to traveling to Kansas with his research associate, young novelist Harper Lee (To Kill a Mockingbird) to research it, through meeting the killers to actually writing it.

Herbert Clutter was a successful farmer, a Methodist who lived in a nice farmhouse with his wife, Bonnie, and two teenage children, Nancy, 16, and Kenyon, 15. Two older daughters no longer lived there.  A former farmhand, Floyd Wells, while in prison, told two other prisoners, Richard “Dick” Hickock and Perry Edward Smith, that Clutter kept a safe in his house that contained a large sum of money.  Out on the street in Kansas City, Hickock decided that he and Perry should rob the farm and take off to Mexico with the cash, so the two drove across Kansas to Holcomb to commit their robbery.

When they discovered that there is no cash in the farmhouse, they murdered the four family members and fled. The next day, the bodies were discovered.  Mr. Clutter’s throat had been cut and he had been shot in the head and the other three each died from a shotgun blast to the head.  The cold, brutal nature of the killings was part of what attracted Capote’s attention.  Nothing was stolen, there were no signs of struggle and each family member was found in a separate room, all of them but the father in bed.  Alvin Dewey, Jr. of the Kansas State Patrol was the key investigator in the case, but the solution came from Floyd Wells.  The man who had given Hickock the information that initiated the murders was also the man who named the killers.  Hickock and Perry were arrested in Las Vegas on December 30, 1959 and returned to Kansas for trial. Between March 22 and March 29, 1960, they were tried at the County Courthouse in Garden City, Kansas.  Although both men pled temporary insanity, the jury brought in guilty verdicts within 45 minutes of deliberation and were sentenced to death by hanging.

While the killers were in the Kansas State Penitentiary in Lansing, Kansas, Capote visited them many times, especially Perry, who opened up to him. As Perry talked about his family and his past, Capote worked to get the real story of the murders.  Hickock had maintained all along that Perry had done the four killings himself, but Perry only claimed two, saying that Hickock had killed both women.  However, when asked to sign a confession to that statement, Perry refused and took the full blame himself.

The actual reasons for the killing may never be known. There was certainly a degree of panic on Hickock’s side when he discovered there was no money to steal and he may have incited Perry to do the shooting.  Perry was introverted, with a tortured personality.  He chewed aspirin relentlessly.  He remains an enigma, claiming to feel great sympathy for the victims, but absolutely cold about the killings.  Regarding Herbert Clutter, he said, “I didn’t want to harm the man. I thought he was a very nice gentleman. Soft spoken. I thought so right up to the moment I cut his throat.”  Cold blood.

The title is so apt. Some might call it cliché, but it is simple, to the point, and so utterly descriptive of the act.

Capote’s writing is beautiful to read. He layers everything in perfectly and builds his characters with depth.  The first time I read this book, I felt myself grow from worry to pure terror.  I remember reading it in bed and getting up to walk around the house double checking the locks and the windows.

The structure of the book is part of what makes it so compelling.  Even though you know what happens, you can’t turn your eyes from it.  Like coming upon a spectacular car crash, you just can’t look away.  When the killings occurred, I felt so sick at heart that I didn’t really want to know the details–and Capote withheld them.  After the killing, when you would think the excitement is over, Capote builds his book all over, getting inside Perry and finally revealing the details, but through Perry’s own cold blood.

On April 14, 1965, Hickock was hung by the neck, suspended from a gallows for nearly 20 minutes before being pronounced dead at 12:41 AM. Then Smith’s execution followed and he was pronounced dead at 1:19 AM.  Four deaths, plus two deaths.  More and more death.

Whether you consider it a novel or nonfiction, it is truly great writing.

3 thoughts on “In Cold Blood by Truman Capote”