To Have and Have Not

“You know how to whistle, don’t you, Steve? You just put your lips together and… blow.”   One can only an imagine an audience in New York in 1944 sitting back with a gasp and then collectively going, “Whoa!”  From her first moment on screen, Lauren Bacall lit up the cinema with her smoky voice and burning eyes, somehow keeping cool, almost mocking, while at the same time beckoning.  Of course, it didn’t hurt that future husband Humphrey Bogart was the man she was looking at. 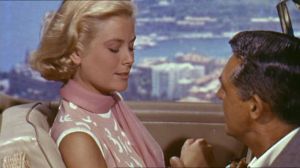 To Catch a Thief

This is Alfred Hitchcock’s most visually beautiful movie.  Filmed on the French Riviera, the gorgeous hills, dotted with old mansions overlooking the Mediterranean Sea vie with the stark beauty of Grace Kelly and chiseled features of Cary Grant to provide enough eye candy to last a lifetime.

To Kill a Mockingbird

To Kill a Mockingbird remains one of the greatest films ever made and the years have not diminished its greatness in any way.  It is unusual to see a nearly perfect adaptation of a modern classic novel (Pulitzer Prize, 1960), but the combination of Harper Lee’s story, Horton Foote’s adaptation, Robert Mulligan’s direction, Henry Bumstead’s art direction, Russell Harlan’s cinematography, and Elmer Bernstein’s wonderful music make this film uniquely touching, a deeply penetrating portrait of small town rural life in the 1930’s, in the deep South.

Alfred Hitchcock’s 1966 cold war thriller is unique among his films because it contains some of the best filmmaking since he moved to America and also some of the worst.  Paul Newman stars as a physicist defecting to East Germany, with Julie Andrews as his stunned fiancé.

Trouble with the Curve

Released in 2012, Trouble with the Curve is a fun little baseball movie that looks at changes in the world of scouting.  Directed by Robert Lorenz, the film stars Clint Eastwood as an aging scout for the Atlanta Braves nearing the end of his long, successful career and Amy Adams as his smart lawyer daughter who tries to help through the last round.

Harper Lee’s 1960 Pulitzer Prize winning novel To Kill a Mockingbird is not a novel about justice.  It is about something much simpler: right and wrong.

Engaging from the first page to the last, it is told in the voice of Jean Louise Finch, a girl from southern Alabama, looking back on the years between 1932 and 1935, when she was six to eight years old and had the nickname Scout. She plays and learns from her brother Jeremy, called Jem, who is four years older, in their hometown of Maycomb, the County seat.  Their father, Atticus, is an attorney and state legislator and they have a black woman, Calpurnia, who cooks, cleans, and acts as surrogate mother when needed.

Although Atticus was not college educated, he is a very thoughtful and well-read man and he ensures that both of his children strive to be as well-educated as possible. Jem claims that Scout has been reading since she was born and she reads to her father every night before she goes to sleep. Something of a tomboy, she has trouble controlling her temper, but she struggles to understand this little world she was born into.

The novel begins in 1932 when a boy comes to spend the summer with his aunt, Miss Stephanie, a neighbor of the Finches. His name is Charles Baker Harris, but he goes by the nickname of Dill and he has many outlandish stories for his new friends, mostly concerning his absent father.  As they play, Jem tells him to stay away from the Radley place because a maniac named Boo Radley lives there and never comes out.  His father keeps him chained to a bed and he only comes out at night to go around to look in people’s windows.  Naturally, Dill wants to see him and hatches various plans to make Boo come out, none of which ever come to anything.

A major portion of the novel deals with their fascination for Boo Radley and their father’s orders not to bother the man, but the most remembered scenes of the book deal with a trial in which Atticus must defend a black field worker, Tom Robinson, who has been accused of raping Mayella Ewell, a poor girl who lives with her redneck father, Robert E. Lee “Bob” Ewell, and seven brothers and sisters behind the town dump.

It is apparent that Tom is innocent, that Mayella was beaten and raped by her own father. Although there is a mountain of circumstantial evidence that points to his innocence, a guilty verdict is a foregone conclusion.  The testimony of Bob and Mayella, two white people, is weighed against the testimony of one black man by a male jury of white men.  Even though the result is a foregone conclusion, Atticus puts of the best defense he can.  Jem is perhaps the most crushed by the verdict.  He has a child’s certainty that justice will be done and his disappointment at the result is deep.

As Jem turns away to deal with this on his own, Scout turns to Atticus and to the women in her community and her Aunt Alexandra to find an explanation for the injustice. What she learns is that the important thing is to try to do right, even against overwhelming odds, and to trust that the world will always lean toward what is right.  The evidence is in the judge, who gave every advantage he could to Tom’s defense, the neighbors, who know that justice wasn’t served, and a community that is more aware of the injustice that either Jem or Scout might believe.  In the end, through the character of Boo Radley, justice is finally served, outside the courtroom.

The message is clear. Do right.  Trust in your fellow man.  Everything will equal out in the end.

Comparisons between the novel and the movie are inevitable, but it is difficult to find any great division to say one is better than the other. The movie more or less tells the essentials of the novel by focussing on the action and it is extremely successful.  One might only wish that all adaptations were as successful, but for me the book lives the story more successfully.  The voice of Scout is unique, engrossing, and deeply touching.  In the movie, we also hear Scout’s voice, but I have always thought that the girl playing Scout, Mary Badham, seemed a little too big for six years of age.  She has moments that are deeply touching, but at the same time, there are moments when it is quite obvious that she wasn’t an actress, when her performance doesn’t quite ring true.  In the novel, the reader always has the feeling of the adult woman Jean Louise getting back into that period of time completely, of being so much inside the head of her younger self that there is no mistaking the authenticity at all.

The other thing that really won me to the novel is that it works under no time constraint. You feel the long days of summer, of the children playing, of the frightening mystery of Boo Radley, and the incredible perplexity of life.  The movie seems to be almost entirely about the trial, but the trial is entirely secondary in the novel.  It takes place near the end and requires only a few chapters to reveal the entirety.  The novel is more deeply concerned with the children and what they have to learn from life and the trial is only another part of the great textbook of life.

If I were asked if one should see the movie or read the book first, I would advise most strongly that one read the book. Take the time to get that depth of voice and character that a novelist has the time to create for you.  Lose yourself in this childhood of the deep south between 1932 and 1935 and take Scout’s meditations and lessons deep inside you.  Then, watch the truncated version that consists almost entirely of action.

My review of the movie is at To Kill a M0ckingbird.