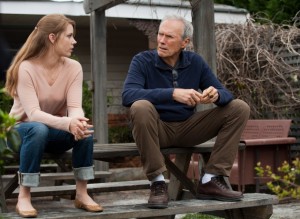 Released in 2012, Trouble with the Curve is a fun little baseball movie that looks at changes in the world of scouting. Directed by Robert Lorenz, the film stars Clint Eastwood as Gus Lobel, an aging scout for the Atlanta Braves nearing the end of his long, successful career.  Although he is having some serious issues with his eyesight, Gus insists on traveling to look at prospects close up, claiming that it is the only way to spot true talent.  A younger scout, Phillip Sanderson (Matthew Lillard) insists that using statistics and computer projections is the way of the future, while the head of scouting, Pete Klein (John Goodman) sides with Gus.  They decide to send Gus out for one more assignment, to look at a prospect, Bo Gentry (Joe Massingill), a kid with a big bat and a big ego to match.

Pete begs Gus’ daughter, Mickey (Amy Adams), to go on the road with her father to make sure he’s alright. Mickey is a successful lawyer who is gunning to make partner with her law firm and is in the middle of a big case, so she turns him down, but goes to see her father anyway.  Gus and Mickey have had a strained relationship ever since Gus sent the little girl away to a private school following an incident when she was traveling with him and was nearly raped.  They both have difficulty dealing with the death of her mother, especially Gus.  When she finds him burning his food and sees his difficulty getting around, she changes her mind and decides to join him on the road.

While watching their prospect, a former pitcher now scouting for the Red Sox, Johnny “The Flame” Flanagan (Justin Timberlake), who had originally been recruited by Gus, renews his friendship with the old man falls for Mickey. The central part of the movie deals with their courtship and estrangement following the draft when the Braves take Bo over Gus’ objections that he can’t hit a curve ball.  Gus had assured Johnny that the Braves wouldn’t take him and when they do, Johnny feels betrayed by the father and daughter.

Although the story isn’t really original, nor the script especially creative, the acting carries the movie. Eastwood is delightful as the crusty old scout and gives a truly inspired performance.  Amy Adams is as lovable as ever as tough cookie Mickey who can see the things that Gus can’t.  Their chemistry as a father and daughter feels authentic and gives the movie the heart that the script failed to deliver.  Justin Timberlake is believable and extremely likable as Johnny and he and Adams develop a chemistry that makes the romance work.  It is pure delight to watch these three actors work together and they make the film one that can be enjoyed over and over again.

It may not be award-winning material, but this is a movie that deserves a place in any “feel-good movie” library.

3 thoughts on “Trouble with the Curve”