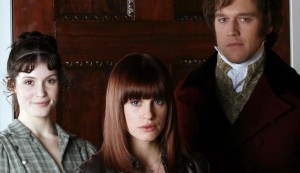 The general fascination with Jane Austen is continued in this 2008 four-part British television film, originally aired by ITV and released in the United States as a three hour film.  Written by Guy Andrews and directed by Dan Zeff, it has the feel of very bad fan fiction cranked out by professionals.  Barely worth 90 minutes of anyone’s time, three hours is far too much for this slim fantasy about a girl who switches places with Elizabeth Bennet in Pride and Prejudice.

This review contains information about the ending of the movie, so beware.

Amanda Price (Jemima Rooper) is a modern Jane Austen stuck in an unromantic relationship with a boozy, uncouth guy, Michael (Daniel Percival) and living in a flat in Hammersmith with a girlfriend, Pirhana (Gugu Mbatha-Raw). All she really wants is to be left alone so she can immerse herself in Austen’s Pride and Prejudice.

When she investigates a noise in her bathroom, she discovers none other than Elizabeth Bennet (Gemma Arterton) who has somehow found a portal in the upstairs of the fictional Bennet cottage and gone to see where it leads, which is 21st Century film reality.  Lizzy is not freaked out at all by joining the 21st Century and invites Amanda to visit the fictional Bennet world.  Once there, Lizzy locks the door, sealing Amanda in the book.  I still cannot process this remarkable change in Elizabeth Bennet.  Such a thing goes completely against the character created by Jane Austen.  When the Bennets discover Amanda, they seem to have no trouble with her arrival and blithely accept that their daughter is in Hammersmith and Amanda is come to visit, wearing a leather jacket.  Magic.  No big deal.

Amanda proceeds to wreak havoc on her favorite novel. Inexplicably, Mr. Bingley (Tom Mison) fall in love with Amanda instead of Jane Bennet (Morven Christie).  She struggles to set things right, but things keep getting worse and worse.  And the characters and plot of the book change completely at the writer’s whim.  There is no effort at all to show natural deviations from the novel or the nature of the characters, but the plot is twisted completely so that the writer can effect the action he wants.

In this upside down fantasy world, Jane marries Mr. Collins (Guy Henry), Charlotte Lucas (Michelle Duncan) runs off to Africa to become a missionary, Elizabeth settles into her new life without a second thought as to her family, Caroline Bingley (Christina Cole) is a Lesbian, Mr. Wickham (Tom Riley) is actually a good guy, and ultimately Mr. Darcy (Elliot Cowan) falls in love with Amanda. When the movie ends, Lizzy and Amanda permanently change places so that Amanda can marry Mr. Darcy and Lizzy can continue her new life in reality.

As a Brit might say: Complete rubbish.  Top to bottom.

Lost in this hash are a couple of pretty good performances, most notably by Hugh Bonneville as Mr. Bennet.

Although the premise is not as bad as it seems, the movie really loses its focus by altering Elizabeth’s character so dramatically. Even as unbelievable as the premise of opening a portal from a fictional book to reality, it still has more believability than seen such a well-known and loved character act in total contradiction to what is known of her.  A better idea would simply have been to drop a modern character into the book as Lizzy Bennet, rather than having them exchange places.  Although that idea might work, it would still require strict adherence to what is already known of the characters, a tenet that Guy Andrews seems to have abandoned anyway.

The key to writing good fantasy is this: reality may be altered as long as the alteration is consistent within itself.  With all of the inconsistencies to Pride and Prejudice present in this movie, one may as well simply attempt to rewrite the novel as one chooses.

On the other hand, if you have no reverence at all for Austen or the novel, you’d may as well lose three hours on a kinky British comedy with no meaning or heart. Enjoy.

One thought on “Lost in Austen”