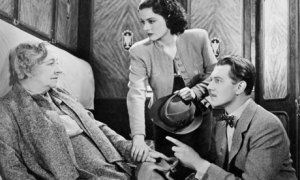 Set in the fictitious European country of Bandrika, this 1938 British comedy-mystery  remains one of Alfred Hitchcock’s best movies.  Based on the 1936 novel The Wheel Spins by Ethel Lina White, the script by Sidney Gilliat and Frank Launder is truly funny, even the suspenseful parts.  Enhanced by Hitchcock’s own wit, it emerges as a truly entertaining popular film that reaches well beyond his normal confines of mystery and suspense.

Genre films are really hit and miss.  If you’re quite lucky, you’ll get a hit, but producers find out all the time that it’s really easy to think you’ve got a winner and then just miss.  This is especially true with romantic comedies, which are perhaps the most difficult genre to score a hit.  Usually, either the comedy fails, the situation isn’t quite creative enough, or–most frequently–the leads just don’t have chemistry, which comes back to the casting.

This Robin Swicord adaptation of Luisa May Alcott’s classic novel is very good, considering that the movie comes in under two hours.  Overall, it is a very good film.  This is the fourth adaptation of Little Women to the screen, it stars Wynona Ryder, Susan Sarandon, Claire Danes, and Kirsten Dunst.

The general fascination with Jane Austen is continued in this 2008 four-part British television film, originally aired by ITV and released in the United States as a three hour film.  Amanda Price is a modern Jane Austen stuck in an unromantic relationship with a boozy, uncouth guy, Michael (Daniel Percival) and living in a flat in Hammersmith with a girlfriend, Pirhana (Gugu Mbatha-Raw).  All she really wants is to be left alone so she can immerse herself in Austen’s Pride and Prejudice.

This film is a 2013 biographical picture about the life of Linda Boreman, beginning at the age of 20 and going through her marriage to Chuck Traynor and the release of her biography, .  Under the trade name of Linda Lovelace, she starred in the 1972 pornographic breakthrough movie Deep Throat and that is her lone claim to fame aside from her biography, Ordeal.