Which is more important: words or pictures?

This is at the core of this powerful 2013 film about education and artistic expression.  The script by Gerald DiPego is extremely well written and the direction by Fred Schepisi is outstanding, but the real reason for this movie’s success is in the two great performances by Clive Owen and Juliette Binoche as the two teachers who inspire their students to understand and to achieve more than mere talent can produce.

Jack Marcus (Clive Owen) teaches writing at Croyden, a high end  preparatory school in Maine.  A professional writer himself, Jack is flirting with losing his job because of functional alcoholism and a lapse of productivity, having failed to publish in quite a few years.  In addition, the school literary magazine which he edits has gone downhill, producing flat, uninspired writing and nothing original from him.  His principal, Rashid (Navid Negahban), confers with head of the governing board, Elspeth (Amy Brenneman) about Jack’s conduct and they give him a warning that his status will be reviewed at the next meeting. 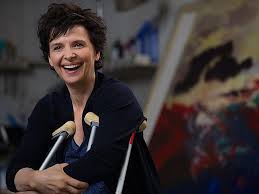 The new Honors Art teacher, well-known painter Dina Delsanto (Juliette Binoche), who suffers from severe rheumatoid arthritis and walks with the aid of a cane, challenges her students to go beyond themselves to create better art.  Using the old phrase “a picture is worth a thousands words” she tells her students that words are cheap and useless, thus fueling the “war” between the two arts at the school and inspiring the students to achieve more.

Drinking heavily and fighting to keep his job, Jack tries to write something new and inspiring, but all he can create is insipid, so he steals a poem that his son wrote and publishes it in the literary magazine as his own.  It is so good that Dina uses it to inspire her students to make drawings and painting based on it.  Three students figure prominently in this battle of the arts: Emily (Valerie Tian) an Asian painter, Cole (Josh Ssettuba) an African-American graphic artist, and Swint (Adam DiMarco), a writer and would-be cartoonist.  Swint, a show-off has a crush on shy Emily and he begins to harass her, eventually going so far as to distribute an obscene cartoon of her throughout the school.  Jack has defended Swint, but when he discovers the cartoon in Swint’s sketchbook, he turns the boy in and Swint is expelled.

When Dina gives terrific testimony of Jack’s behalf at the board meeting, his job is saved.  He brings her flowers and they consummate their simmering love, but Jack gets up in the night, finds a bottle of vodka in her refrigerator and proceeds to get drunk.  He tells her about plagiarizing the poem from his son and then, losing his balance, he falls into Dina’s most important painting, smearing it.  She throws him out and Jack must begin to confront his own problems for the first time, facing his alcoholism and trying to redeem his own spirit.

Obviously, in a movie like this, the writing is paramount and I give extremely high marks to Gerald DiPego for his literate and organic script.  Director Fred Schepisi thought his words were important enough that he was kept on the set during the filming in order to make changes himself, rather than bringing in any other writers.  But even though writing is important, this film also stands or falls based on its art and Juliette Binoche, doing her own painting, brought a sense of legitimacy by creating terrific paintings and drawings all her own.

Of course, there is no real battle between art and literature.  They are two completely different and equally valid arts.  On the surface, they would appear to be complete opposites, but, as with all creation, the goal should be the same: to touch the human heart.  This movie does that, in part, due to the organic nature of the writing and the painting that fills it.  When I say that a work of art is organic, I mean that it grows naturally out of its components.  The story in Words and Pictures has more to do with Jack’s own frailty and his dependence on alcohol.  It is that dependence that brings his life into complete disarray, despite his other endearing qualities, and it is his control of that weakness that allows him to become a complete person again.  The same is true of Delsanto’s art.  Like, Jack, she has floundered for many years, not because of a lack of inspiration, but because her own degenerating body has had her full attention.  She needed something to wake her up and Jack’s challenge is what brings her back to life creatively.  Her art grows beyond her own injured body to become something beyond what she had been capable of.

Writing an organic script that is completely natural is not an easy process, but DiPego has created a real beauty here.

Clive Owen drives the film with his performance.  The center of the film, he is realistic in every way as an American teacher.  His control of the language, his phrasing, and his maniacal love of good writing is infectious and he seems to be a terrific teacher.  Likewise, Juliette Binoche gives a wonderful performance as Delsanto, nuanced, layered, and impressive.

This film has a strange, emotional power that elevates in the same way that Stand and Deliver moves one to aspire.  Immensely satisfying! I highly recommend this movie!

2 thoughts on “Words and Pictures”