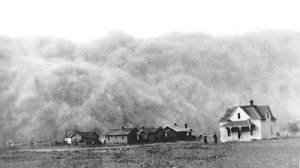 In 2012, PBS aired this four part miniseries by famed documentary director Ken Burns that looks at the ecological catastrophe that occurred in America’s Great Plains between approximately 1931 and 1938. Written by Dayton Duncan and narrated by Peter Coyote, the film combines still photographs and film from the period with color film shot specifically for the program, interviews with survivors of the calamity, and voice-overs of writing from various victims.

The first part of the film, “The Great Plow-Up” looks at the land before the disaster, showing how the tough area survived the incessant wind and drought by evolving the sturdy buffalo grass that grew deep into the soil for hundreds of miles from Canada to the Texas panhandle. Native Americans were ideally suited as inhabitants because they did not depend on agriculture, but rather on the buffalo who roamed this great, free expanse of prairie.

When Indians were routed onto reservations, Anglos first used the grazing land for cattle, but the frequent droughts, long and difficult transportation to markets, and division of the land into individual, fenced parcels were but a few of the obstacles to successful ranching. The true changes in the land began to occur when Oklahoma was opened to homesteading settlers and immigrants and poor tenant farmers spilled into the territory on the promise of owning their own property. The wheat boom prior to and during World War I spurred further settlement. The tough buffalo grass was torn out by plows and wheat was planted in its stead. “Suitcase farmers” streamed in from cities, present only long enough to plow and sow before returning to cities and wait for the rain to grow the wheat before returning to harvest it. This “great plow-up” was aided by one of the wettest decades the Great Plains ever saw, during the 1920s. The boom carried through the stock market crash of 1929 and beyond as millions of acres were plowed up for cash crops.

“Dust to Eat” then chronicles the Great Depression’s effects on the wheat market as prices fell due to the excess of wheat and millions of tons filled grain elevators or were strewn out rotting on the prairie. At the same time, a periodic drought assaulted the land and the constant winds picked up the topsoil and circulated it in the sky. Beginning in 1931, simple dust storms escalated into gigantic billows of earth, born by the winds across the plains and dumped back onto the land as loose, dry pellets mixed with sand. As the 30’s continued, more and more of these storms assaulted the farmers, blossoming into deadly concentrations of tiny particles that worked their way into the lungs of human beings. “Dust pneumonia” became a common cause of death. These storms reached their apex on “Black Sunday,” April 14, 1935 when a wall of concentrated dirty air two hundred miles wide and ten thousand feet high swept across “No Man’s Land.”

The effects of this “end of the world” storm fell in Chicago, then Washington D.C. and New York, finally dumping the last of its dust over the Atlantic Ocean. Springing into action, the administration of Franklin D. Roosevelt started the work that would eventually reclaim the Great Plains, but it would take a long time.

The third installment of the series, “Reaping the Whirlwind” details the continued catastrophe through the late ’30’s and the final installment, “The Hardy Ones” covers the mass exodus to California and the farmers who stayed and eventually saw the land regenerate through improved farming techniques, such as terracing, planting of wind-break trees, and so forth.

Overall, the film is totally captivating and at its best deeply moving. Photographs by Dorothea Lange and other photographers who memorialized the face of the ecological disaster are stunning and deeply evocative, as are the voices of those who were only children when the dust clouds descended on them. The stature of the Black Sunday storm is fully realized in Burns’ beautiful camera movement and Duncan’s terrific script.

This film should be seen by all mid-westerners and most certainly by farmers and anyone intimately connected to the land. This catastrophe was not forced on us by nature, but we brought it about ourselves through excessive greed, lack of forethought, and our tampering with an ecosystem that was perfectly evolved to survive and continue on its own. This was mankind’s mistake.

It was a mistake whose lessons we should take to heart. Near the end of the film, as we see the effect of irrigation on miles of fields, we are reminded that the water comes directly from the Oglala Aquifer, whose capacity is dwindling, year by year, as we extract millions of gallons to dump on our crops.

What will happen to us when it is gone and our Bread Basket reverts to the windswept prairie of our past?