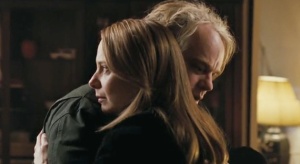 This movie is about two relationships going in opposite directions. One of them, just beginning, is very sweet and the other is clearly at the end of its shelf life.

Jack (Phillip Seymour Hoffman) is a shy and sensitive New York limo driver who works for his uncle and lives in his uncle’s basement. He listens to raggae, tries to whirl his blond locks into dreads, and dreams about working for the MTA.  His best friend, Clyde (John Ortiz) also works for his uncle as a limo driver and is married to Lucy (Daphne Ruben-Vega) who works in the office of a mortician.

The couple sets Jack up with Lucy’s new co-worker, Connie (Amy Ryan), a shy, nervous girl who seems to be right for him. Their own shyness really works to their advantage as each one takes it nice and slow, careful to make sure of each other before taking any big steps at all.  As Jack walks Connie to a cab on their first date, she mentions that she’d like to go boating some time.  They are walking through the snow at the time and Jack remarks that it might be better to wait for summer.  But he takes it seriously and Clyde sets out to teach him how to swim at a Harlem pool.

Connie is approached by a strange man in the subway on her way to work and she violently resists, breaking her nose. Lucy calls 911 and she is taken to the hospital.  Jack buys a little stuffed koala bear for her and they talk about a second date, maybe for dinner.  She tells him that no one has ever cooked for her, so Jack decides to learn how to cook and make a splendid meal for her.  Clyde recommends a chef he knows from the Waldorf Astoria that he calls “the Cannoli.”  Without Jack prompting him, Clyde then volunteers that Lucy had an affair with the chef that lasted two years.  It’s obviously bothering him, but he tries to pretend that they’ve worked the problem out.

Applying himself to his swimming and cooking lessons, Jack gets good at both. After a few initial problems, he gets his application into the MTA and waits to hear whether he will be called for an interview.  As he and Connie become more intimate, he comes to understand that she has serious psychological issues about sex, but he is understanding and goes slow, much to her relief.

Without revealing how the movie ends, I will say that both situations come to a head when Jack finally cooks his big meal for Connie at Clyde and Lucy’s apartment.

Phillip Seymour Hoffman directed this moving film, based on the stage play he appeared in, adapted for the screen by the playwright, Robert Glaudini. The study in opposites is very funny at times, but a feeling of tension runs underneath the surface and it kept me on the edge of my seat wondering what would happen.  At an hour and twenty-four minutes in length, the pacing and timing are perfect.

Hoffman’s performance as Jack is just amazing. It is a pleasure to watch such a gifted actor creating such a layered character.  Amy Ryan gives a great performance as Connie and she works as a perfect foil for Jack.  You find yourself hoping that these two gentle, injured people will find a way to make their relationship work, even as it hurts to see what can happen to a relationship at the other end of the scale.  John Ortiz is excellent as Clyde and Daphne Ruben-Vega compliments him very well as the two cope with a relationship that doesn’t have the glue to hold it together.

I’m an innocent when it comes to betrayal. I’ll never understand how partners in a marriage can turn away and wound the other so deeply.  Jealousy remains one of the great emotional themes of art.

This is a very fine movie and it should be seen. When it was released, it kind of slid by me–and pretty much everyone else, I gather, but it is really good filmmaking.  It’s a story well-crafted and well-filmed and it deserves far more attention than it has gotten.  I highly recommend it for adult audiences.