Jenna (Keri Russell) is an amazing pie-maker in some unnamed southern town. She works at Joe’s Pie Diner with her friends, Becky (Cheryl Hines) and Dawn (Adrienne Shelly), under the management of Cal (Lew Temple) and the ownership of Joe (Andy Griffith).  She’s married to a domineering redneck man named Earl (Jeremy Sisto), who takes all of her tip money and bullies her relentlessly, but she’s been hiding away some of the money and she hopes to enter a pie contest where the prize is $25,000–with the intention of leaving him as soon as she can.  This plan gets derailed at the very beginning of the movie when she discovers she’s pregnant.

This brings on the inspiration for her to make tomorrow’s featured pie, the “I Don’t Want Earl’s Baby Pie.” Dawn remarks that she shouldn’t probably write that on the menu board, so Jenna changes the name to the “Bad Baby Pie,” a quiche with Brie cheese and a smoked ham center.

She considers making an “I Hate My Husband Pie” made of bittersweet chocolate–unsweetened–made into a pudding and drowned in caramel. Deciding to keep the baby, she goes to see her doctor only to find that her gynecologist has gone into semi-retirement and most of her cases have been taken over by young, attractive Dr. Jim Pomatter (Nathan Fillion).  When he congratulates her, she tells him that she doesn’t really want the baby, but is having it anyway, so please don’t be all happy for her.  “It’s not a party.”

Her mother taught her to bake as a child, singing this little song (written by Adrienne Shelly): 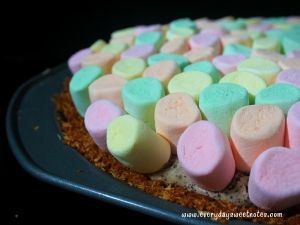 Everything is about pie creation. She brings the doctor her “Marshmallow Mermaid Pie” that she created when she was nine years old.  She makes a “Falling In Love Pie” (chocolate mousse) for Dawn’s date, and she fantasizes about new pies night and day.  At one point, she considers making a “Baby Screaming Its Head Off in the Middle of the Night and Ruining My Life Pie” that would be a New York cheesecake brushed with brandy and topped with pecans and nutmeg.

Finding Dr. Pomatter irresistible, she begins an affair with him and considers making an “Earl Murders Me ‘Cause I’m Having An Affair Pie” made with smashed blackberries and raspberries in a chocolate crust, but decides it would be better to make an “I Can’t Have An Affair Because It’s Wrong and I Don’t Want Earl to Kill Me Pie” with vanilla custard and banana–no–hold the banana. Among the other pies mentioned in the movie are the “Spanish Dancer Pie,” the “Naughty Pumpkin Pie,” the “Singing Tuna Casserole,” and “Jenna’s Special Strawberry Chocolate Oasis Pie.”

After she discovers that Becky is having an affair with Cal, she asks him, “Are you happy?” He answers, “I’m happy enough.  I don’t expect much, give much.  I don’t get much.  I generally enjoy whatever comes up.”  Dawn finds happiness with a little accountant named Ogie, but Earl continues to make Jenna’s life miserable, forcing her to have sex with him, slapping her around, and controlling her.  In fact, she conceives of the “Pregnant, Miserable Self-Pitying Loser Pie,” made of lumpy oatmeal with fruitcake mashed in and served flambé.

In spite of the comedy, the movie holds a very dark side. Earl, for example, though an ignorant bully, has unexpected depth.  He’s never really been loved and he depends on his control over Jenna to give meaning to his life.  Joe, the owner of the Pie Shop, is himself an old loser, but he advises Jenna to leave Earl and start all over.  “This life will kill you,” he says.  “Make the right choice.”

The script contains many unexpected depths and Shelly’s deft direction and control of the story arc keep the movie on point through its one hour and forty-eight minutes. Keri Russell is beautiful, with a big heart that makes you love and root for Jenna to find a way out of her mess.  Nathan Fillion is charming as the nervous, tender Dr. Pomatter.  Cheryl Hines and Adrienne Shelly are funny and poignant as her waitress friends and Andy Griffith is terrific as Joe–again providing unexpected depths.

But the pies are magnificent. Every pie in the movie looks absolutely beautiful and each one acts like a Greek chorus, providing commentary on the action. 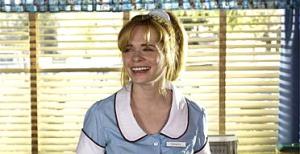 Unfortunately, Adrienne Shelly did not live to see her movie appear at the Sundance Film Festival or to see its critical success. Three months before it was due to open, Shelly discovered a thief in her apartment.  The man panicked and killed her.  A foundation has since been established in her name to help young female filmmakers fulfill their dreams and you man contribute at The Adrienne Shelly Foundation.

Everyone should see this movie! It’s a film that can be seen over and over again with a kind of sensual culinary pleasure, with laughter and tears, and lots and lots of love.