Marnie is undoubtedly Alfred Hitchcock’s most unusual film.  There’s no murder, no spies, no sabotage, and practically no suspense.  It is a straight up psychological drama.

The movie begins with a theft.  A young woman, Marnie (Tippi Hedren) goes under various aliases as she moves from one company to another gaining trust and then stealing money from their safe before disappearing into a new identity.  She has just robbed an accounting firm that represents Rutland and Co., owned by Mark Rutland (Sean Connery), who remembers seeing the girl on a visit.  Following her robbery, Marnie washes the black dye from her hair to reveal her own stunning natural blonde.  She makes her way into the country where she has a standing relationship with a stable and a horse all ready for her to ride.  She also visits her mother (Louise Latham) in Baltimore, where we see her acute jealousy for a little girl that her mother looks after.  She wonders why her own mother hates her so much.

Throughout the early set-up of the film, we are shown glimpses of Marnie’s fears and phobias.  The color of bright red, for example, puts her into a blind, mindless panic.  Her mother urges her to stay away from men, because they will only hurt her and Marnie acknowledges that she’s never had a relationship with a man and never will.

In Philadelphia, she begins her life as a thief yet again, this time taking a job at the Rutland Company, not realizing Rutland’s relationship with the accounting firm she’s recently robbed.  Mark decides to hire her over the objections of his manager.  A woman named Susan (Mariette Hartley) is secretary to the manager, who keeps the combination to the safe in her locked desk.  On her first day in the office, she meets Mark’s former sister-in-law Lil (Diane Baker) who obviously has designs on Mark.  He asks Marnie to come into his office on a Saturday to work, but they are disturbed by a thunderstorm.  The lightning terrifies Marnie and sends into another blind panic.  Mark comforts her and drives her home.  Discovering her love of horses, he arranges a date with her at the horse races in Atlantic City.  Afterwards, he drives her home to meet his family.

Finally seeing her opportunity, she steals the key to Susan’s desk, stays late in the office, and steals a substantial amount of money from the safe.  Realizing the situation, Mark replaces the money and tracks her down at the stable where she rides her horse.  He blackmails her into marrying him and takes her away for a honeymoon cruise, where he rapes her.  Lil becomes suspicious of Marnie.  Snooping around while Mark and Marnie are away, she discovers that Mark has paid off the accounting firm where Marnie previously stole money.  Upon their return, she invites the manager of that firm to a party at the Rutlands.  When Marnie sees her former boss, she freaks out and tries to leave.

Ultimately, Mark must force her to re-live her past and come to terms with the reason for all of her fears.

This is a very uneven film, even though Marnie’s character offers the kind of drama that might have intrigued Tennessee Williams.  The first problem is the length of the movie.  At two hours and 11 minutes, it is simply too long for the subject matter and it becomes deeply bogged down and very difficult to watch.  It seems to me that as Hitchcock became more and more popular as a director, he allowed himself to include many things in his movies that were not essential to the film.  Not only does Marnie suffer from this, but so does North by Northwest, The Man Who Knew Too Much, and others.  These films all required a firm hand in the cutting room, but Hitchcock was a demanding director and editor George Tomasini, who worked with him a large number of his American films, was quite obliging.

There are other technical issues as well.  Hitchcock’s reliance on rear projection and matte painting fails him quite dramatically here, especially in the scenes where Marnie is riding a horse, coming off as very unrealistic. 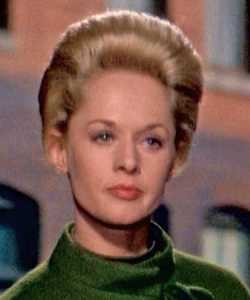 Although he was dedicated to the elevation of model Tippi Hedren to stardom, her fine performance in The Birds does not carry over well into this psychological drama.  At times she seems rather wooden and signals her emotions, rather than using nuance to fill in the blanks.  Sean Connery, a very accomplished actor, does okay in the movie, but one is always aware that he is Sean Connery.  I don’t think there was a single spot in the movie where I actually thought he was Mark Rutland.  In addition, I don’t sense any kind of chemistry between the two stars in this movie and I didn’t really care what happened to them.  Without any real suspense to drive the movie–and with constantly looking at my watch and wondering when it would be over–it really felt forced.

There are two really good performances in the film.  Louise Latham is simply outstanding as Marnie’s mother, bringing the kind of nuance that makes for a starkly realistic character.  And Diane Baker is excellent as Lil, the jilted sister-in-law.

This might have been a great film, with sufficient editing, perhaps with a different leading actress as Marnie and maybe an American actor as Mark, with some of the action sequences done more realistically.  As it is, the movie looks like an overblown Hollywood version of what should be a compelling drama.

I have to rank this near the bottom of Hitchcock’s American films and I find it hard to recommend it to anyone but die-hard Hitchcock fans.